The Ascari KZ1 A10 is a track developed version of the standard Ascari KZ1. The KZ1 was already renown for its balanced chassis and powerful engine and provided a good basis for the newly modified Ascari A10. The modified A10 version of the KZ1 was built to celebrate the 10th anniversary of the marque, similar to how the Ferrari F40 was named to celebrate 40 years of Ferrari.

New equipment featured on the A10 included AP brakes, special Dymag half carbon fibre, half alloy wheels (10kg less each than a standard KZ1 wheel). The car also has a squential shift gearbox with the option of a normal manual. The car uses carbon fibre extensively (in the chassis and bodywork), to keep weight down while providing great strength. The A10 has no ABS or traction control system to save weight. Most of the soundproofing, like other luxuries are removed on the A10; one of the few additions is the FIA spec roll cage.

This limited edition super car is well regarded by critics, with well weighted steering, a balanced chassis, managaeble on limit performance and incredible power. The Top Gear test track time is faster than a number of other expensive super cars like the Koenigsegg CCX, Ferrari Enzo and Porsche Carrera GT.

The A10 was intended to be limited to only 50 hand made cars. With its high power to weight ratio and incredible handling, a record breaking time around the Nurburgring would be possible. Currently, the Maserati MC12 holds the production road car record with a time of 7:24.29

Jeremy Clarkson jokingly tested the car with a Daihatsu Materia but did offer extremely high praise for the performance of the A10.

Jeremy Clarkson on the Ascari A10

Clarkson went on to say the car was as “well finished as an Army Land Rover” which was probably because it was still a pre-production car. Overall Clarkson found the car compared well against contemporaries from Koenigsegg. High praise indeed for the car the Ascari engineers nickname “The Beast”.

End Of The Road For Ascari

Unfortunately Ascari was to be declared bankrupt in 2010. It’s low volume, highly bespoke cars stopped being built and the company closed. The Ascari race resort still appears to be open. It’s not clear how many examples of the Ascari A10 were completed. The A10 that was used for press work: OU55GWJ is listed as not MOT’d which means it’s not legal to be driven in the UK. Details for this car listed below.

This one example may have ended up being the only example built of the Ascari A10, a sad end for a company that had shown much innovation in motorsport and road cars. 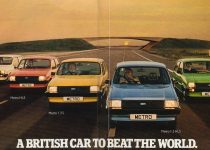