The Lotus Eclat (Type 76) is a sports car designed by Oliver Winterbottom and produced from 1975 to 1982. The Eclat was the first Lotus car to feature a hatchback. The Eclat helped take Lotus down a different path, both in expanding the range of cars and the styling too.

Until the 1974 Lotus Elite, most Lotus models were curvy, compact 2 seaters. The Elan +2 had included small backseats but these could only be used by children. Colin Chapman wanted bigger more practical cars that would drive as well as other Lotus cars.

The Lotus Elite (MK2) could seat 4 adults in comfort so was used as the basis of the Eclat. Oliver Winterbottom, had designed the Elite and was tasked with coming up with a sleeker design for the Eclat, which would feature a hatchback instead of the Elite’s shooting brake design.

Winterbottom set about developing the Eclat. The M52 prototype was the result of the work of creating something consistent with the Elite, but sleeker.

Winterbottom and Chapman had worked together to design boats for Chapman’s JCL Marine boat company. The GFRP moulding process used in the boat industry was applied to both the Elite and Eclat. The bodywork was built out of two main parts, an upper and lower part. A chrome strip carefully concealed this join on the finished car.

While the Elan was the first Lotus to combine fibre glass body and backbone chassis to keep the car light and responsive to drive, the Elite and Eclat benefited from the enhanced refinement the material was able to add to the driving experience.

The Eclat started life with the Lotus 907 engine, originally based on a Vauxhall engine block. It was first used in the Jensen Healey in 1972 and was deemed suitable for use in the Eclat. The engine was often criticised for being low on torque, however contemporary road tests revealed a very favourable view of the Eclat – particularly in the driving experience.

“It is not true to say that there is not much fun left in motoring – pick the right roads and the right car and there is but there are very few cars available which are fun to drive all the time. The Lotus Eclat Sprint is one of those cars”

“The Eclat, particularly in its Sprint form, has been aimed unquestionably at the enthusiast, with performance, braking and handling so brilliant as to offer the competent driver sheer ecstasy”

The Legacy Of Winterbottom’s Wedge

As the Elite before it, the Lotus Eclat was a rakish wedge shape. This shape was introduced by Oliver Winterbottom and was a distinct change from the curvy cars Lotus had built before. The pop up headlights reduced the frontal area of the car, providing aerodynamic efficiencies (until the lights were used).

The influence of Winterbottom’s style direction is considerable. His early work on the 1974 Elite and 1975 Eclat fed through to the final Lotus Esprit which finished production in 2004. After thirty years of wedge influenced designs, Lotus began to revert to curvier styling of older cars with the 1996 Lotus Elise (Designed by Julian Thomson).

Winterbottom’s skill with fibre glass bodied sports cars attracted TVR to his services in 1980. His first work with the company was the Tasmin, which was the first of the affectionately known “Wedge” series of cars which made up TVR range throughout the 1980s.

Picture the scene, it’s 1977 in Britain and you’re on the look out for a new sports car. Here are some of the cars available that would seat 4 and offer some driving thrills: 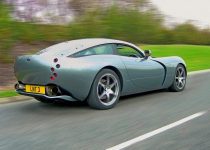 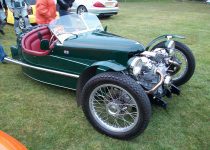 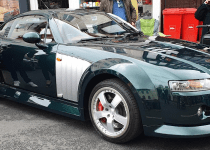